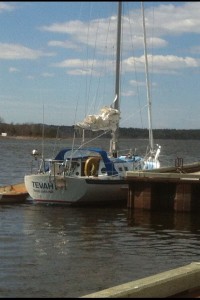 We plan to leave St. Andrews on June 26 to head to Rogue island
We will have to clear in to the USA at Eastport first thing.

Here is what the Taft cruising guide says.

FOR a long time, Roque Island has been the ultimate goal of sailors cruising Down East—perhaps because of its beautiful, mile-long white sand beach, perhaps because there is the sense of something special about this island, perhaps because it takes determination to sail east of Schoodic and Petit Manan.

Roque is the centerpiece of an archipelago that includes Great and Little Spruce, Lakeman, Marsh and Bar, Double Shot, Anguilla, and Halifax Island—all set in a body of water called Chandler Bay to the west and Englishman Bay to the east. Shaped roughly like an H, the Roque archipelago offers a delightful variety of anchorages. The great southern beach on Roque Harbor is the most familiar. Lakeman Harbor to the east, surrounded by Lakeman, Marsh, and Bar Island, provides a secure anchorage. Tiny, landlocked Bunker Cove is to the west. Another sand beach curves around Shorey Cove, on the north side of the island.

Indians were the earliest-known summer inhabitants of Roque, and numerous shell heaps have been studied here by archaeologists. Joseph Peabody acquired Roque in 1806, and for almost two centuries the island has served as a resort and retreat for his descendants, the Gardner and Monks families. The old family buildings and farmhouses, red and yellow, are on the eastern side of Squire Point, overlooking Shorey Cove. There is a private boatyard, with a dock, metal and woodworking shops, and a small fleet at the moorings. Boats are hauled by attaching a farm tractor to a great old anchor half-buried in the ground and winching them up the ways. 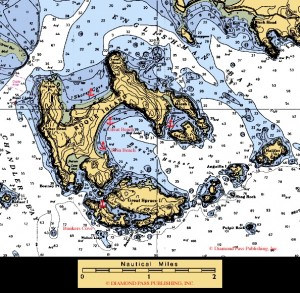 Roque is a working farm, and it is almost self-sufficient, with cattle, sheep, pigs, geese, chickens, pigeons, and other animals. Products of the island include milk, butter, eggs, wool, beef, pork, squab, raspberries, rhubarb, herbs, and vegetables. The caretaker and the owners take pride in both frugality and ingenuity, and the farm has some marvelous Rube Goldberg contraptions, including a continuous conveyor belt built from scrap material to cut, carry, and split firewood.

In summertime, it is not unusual to see family members traveling in a horse-drawn carriage. During the winter, the resident Clydesdales haul guests on old blue sledges. As John Peabody Monks said in his book Roque Island, Maine—A History: “The visitor to Roque forgets the urgencies of time and place.”

“Perroquet” is the French word for parrot, and it seems plausible that, as Samuel Eliot Morison suggests, Roque was named by the French explorers for the puffin, or sea parrot. Or perhaps the origin was “rogue,” considering the pirates who were based nearby.

When Joseph Peabody bought Roque, he made good use of it. First he built a tidal dam across Paradise Cove to power a gristmill and a sawmill. Several large vessels were built for him at a shipyard in the little bight at the mouth of Paradise Cove, just west of Point Olga. At one time, Peabody owned 63 ships and employed more than 3,000 men in his various shipping and trading

In 1868, John and Catharine Gardner sold Roque Island for reasons unknown. Ten years later, two of their sons bought it back for double the price, and the island has been in the family ever since. Shortly thereafter, the Gardners bought Great and Little Spruce, Lakeman, Anguilla, and the little Bar Islands. Double Shot was acquired in the 1930s.

A lumber mill once stood at the head of Patten Cove from which laths were shipped on coastal steamers to New York—about three million of them between 1926 and 1928.

There are lots of stories of life on Roque, both human and animal. Pigs were once allowed to roam free on the island, and it is reported that a particularly bright pig learned how to dig clams on the shore. Then there is the story of lobsterman Horace Dunbar, who enjoyed a party ashore with some visiting yachtsmen and had his share of liquor. Finally it was time to go, so Horace got in his skiff and started to row home. “Two hours later, he was found by more sober members of the party, still rowing steadily, with his boat’s painter attached to the wharf.”

This entry was posted in Uncategorized. Bookmark the permalink.